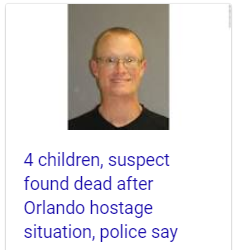 Shortly before midnight, police entered the Orlando apartment of a man who was holding four children hostage, only to find all five of them dead from gunshot wounds. The event also included the shooting of a police officer, who is in stable condition, but expected to survive.

This story makes news on June 12th, exactly two years after the Pulse Nightclub shooting in the same city. That mass shooting was the nation’s worst in history up until the Las Vegas Route 91 Harvest Festival shooting. Recall, the Stoneman Douglas shooting occurred exactly 612 days after the 6/12 Pulse shooting.

The name of the perpetrator is Gary Wayne Lindsey

163 is the 38th prime number. This story comes out of Orlando, Florida…

The Hebrew word for “Moon” sums to 38. I find this interesting because Lindsey’s full name, which includes a “Jr.” at the end, sums to 235

The Moon completes one Metonic cycle every 235 months, which is a synchronous orbit with 19 solar years. The date had 19 numerology.

June 11th, the date of this event, is also the date that leaves 203 days in the year. They’re calling this a hostage situation – the Pulse shooting also had one of these. Note that we’re also being told another hostage situation is currently ongoing in Paris, France today as well.

Lindsey’s name sums to 81 in both Reduction methods:

Note that this man is also a Jr. It’s amazing how many “Juniors” find their way into national news stories. “Junior” = 33 (R), a primary hoax / ritual code.

Governor Rick Scott was 158 days after the 7th anniversary of the date he took office:

Measuring instead from Rick Scott’s birthday, we find it’s 193 days:

The only witness mentioned in the article has this gematria too…

Her name also sums to 55, matching the date numerology: