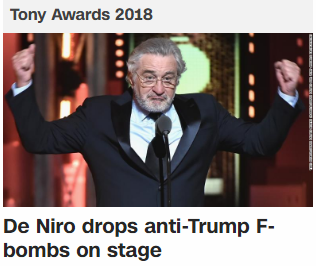 Of course, I’m not one to believe in partisan politics. But you really have to ask yourselves – what is up with these liberals?

The way these celebrities behave in public is truly abhorrent. Yes, I understand De Niro was told to go on stage and say what he did. But the idea that people can rally behind such vulgar language at an event that’s supposed to have nothing to do with politics is what really freaks me out.

This tirade, just as any major news story, was completely executed by the numbers. This ritual is a tribute to time and the Metonic cycle, the most significant cycle of time in relation to the Moon.

Robert De Niro is an ideal man to lash out at the 2018 Tonys.

De Niro is a little more than 42 weeks after his birthday. The 42nd prime number is 181

As for it being the year 2018 – 218 is the Hebrew gematria of the word for Moon. It’s also the English value of De Niro

In Franc Baconis, Tony sums to 147

The 1943 birthday of Robert De Niro and the 1946 birthday of Donald Trump are separated by just over 147 weeks:

The Greek word for the Metonic Cycle is Enneadecaeteris. This word shares gematria with the word President in multiple methods:

393 sums to 1331, the number that represents a total solar eclipse.

There are 1033 days, including the end date, between the 1943 birthday of Robert De Niro and the 1946 birthday of Donald Trump:

In the past week, we’ve had a pair of suicides by hanging – Kate Spade and Anthony Bourdain. Another famous star to have hung himself was Robin Williams – so it’s interesting Robbie Williams was in the news for happening to be at the Mandarin Oriental Hotel in London when it caught fire last week.

So now, De Niro has, euphemistically, hangs Trump in front of a live national audience. So I find the number of days between their birthdays interesting: 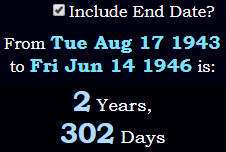 One last note…the number 13 is significant to the office of the presidency in gematria.