Headlines this morning are buzzing about Donald Trump’s decision to withdraw the White House’s invitation for the Philadelphia Eagles to visit following their Super Bowl win in February. The reason? Some of the players turned the invitation down due to their disagreement about standing during the national anthem.

So Trump being Trump, the actor-agent that he is, one-upped the Eagles players by telling ALL the players they couldn’t show up. This is another example of the media attempting to incite division among the lower classes, this time on the topic of patriotism. Lots of different bullets in their arsenal…

The visit was to have occurred today, Tuesday, June 5th. This is 4 months, 1 day after the Super Bowl: 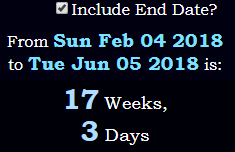 Today has full numerology of 49

Today also has reduced numerology of 22

You have to love the irony in this story. I mean, what could be more patriotic than an Eagle?! I guess the Eagles did have to defeat the Patriots in the Super Bowl…

Donald Trump was born during a total lunar eclipse. He is the 44th person to be the U.S. President, but is officially President number 45