On NBA’s opening night on October 17th, 2017, Gordon Hayward suffered a devastating leg injury that ended his season. He fractured his tibia and dislocated ankle in a nasty fall you are welcome to watch (WARNING: Graphic video of a leg bending in ways it’s not meant to) if you have the stomach for it.

Is it spell-casting? Is it Mother Nature? Father Saturn? Something very bizarre is going on in this world. Perhaps there’s more structure to our true reality than we’ve been giving it credit for.

It’s becoming my theory that the Moon is, in essence, the source of our “holographic” reality. I believe it is a conscious entity that is actively pulling the strings here on Earth, causing synchronicities and guiding the souls here on this plane of existence through our lives. This is a statement I would have thought to be completely crazy not so long ago. However, I don’t feel like I believe it – I feel more as if I’ve realized and now accept it.

Anyways, let’s begin with the value of Moon in Jewish gematria, which as I say, seems to be the most significant cipher, given its larger results, leaving less room for coincidence.

Gordon Hayward was born on a date with 17 numerology. On the Boston Celtics, he wears number 20

The date he broke his leg had 17 numerology using the same method. This also happened to be the 17th day of the month in the year ’17

When Gordon Hayward suffered a fractured tibia and dislocated ankle, he was exactly 10,070 days old:

The number seventeen has gematria of 990 in the Jewish method, which is of extreme significance to the spelling of numbers. Hayward’s full name sums to 99 in both Reduction methods, and his common name yields the same result in the English Kabbalah.

There were 99 years between the last two coast-to-coast total solar eclipses in the United States. This number is connected to The Moon.

Measuring to the date of Hayward’s injury from the August 2017 Great American eclipse gives us 57 days:

The gematria of 57 in Jewish gematria connects us directly to its Hebrew gematria in a beautiful way.

Hayward was born on March 23rd, the date leaving 283 days in the year

The two most significant cycles of time in relation to the Moon are the Metonic and Saros cycles. The Saros cycle is 223 synodic months and allows us to predict the next solar or lunar eclipse. The Hebrew word for “The Moon” sums to 223, as does Gordon’s birthday in the Reverse order.

On the date he suffered his nasty injury, Hayward was 22 weeks, 3 days before his birthday:

This means he was in his 209th day after his most recent birthday:

209 is the Hebrew value of Solar eclipse, an event of course the Moon is responsible for. Using the standard Order, Gordon’s birthday also sums to 209

He announced he would sign with the Celtics on July 4th, the date written 7/04

1331 is the number that represents a total solar eclipse.

Not only does Hayward have 35 gematria, but the date he was born and the date of his injury both had 35 numerology

290 is a significant Biblical number – it’s the gematria of Christ, who was the ultimate eclipse sacrifice 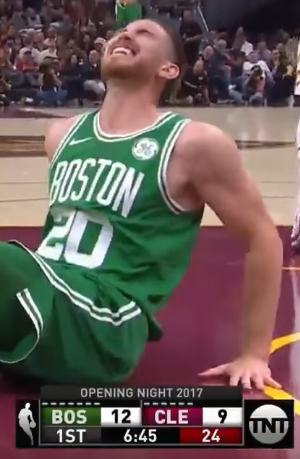 Notice how the score reads 12-9

With 6:45 on the clock, this means Hayward was just 5:15 into the season. This is wild, considering the gematria of Jesus, who was crucified at age thirty-three

Another observation…6:45 can also be merged to create the number 645. Add the 21 points scored in the game so far and you have a sum of 666

The second coming of Christ is mentioned 318 times in the New Testament. The injury came against the Cleveland Cavaliers