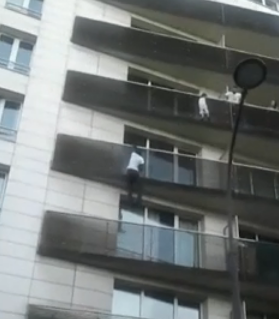 The bullshit in this news story can be smelled from miles away.

The story is so ridiculous, it’s head-spinning. They’re telling us this child was helplessly dangling from a fifth-floor balcony in Paris, France.

You can see a man to the right just about within reach of the child. There’s some sort of partition separating the different apartments’ balconies, but the man is in the process of helping the child by the time the man climbing reaches him. Still, he let the kid dangle for a long time. After this shot, the Malian immigrant who scaled the balconies grabs the child and pulls him to safety.

Of course, there’s no explanation for how a child ended up in this predicament in the first place. How is the little guy strong enough to hold himself up for this long? And where the hell is his family?

But nevermind these perfectly-logical questions. This news story is a ritual that was played out in relation to the 2015 Bataclan shooting hoax, which also took place in Paris, France, in which we got very bad CGI of what appeared to be a pregnant woman dangling from a cement window by only her fingertips: 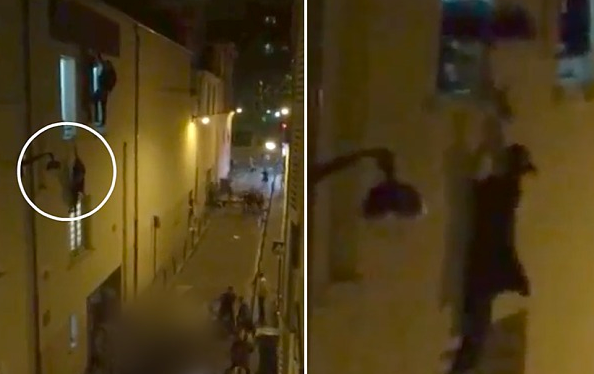 Of course, the cameraman pans away from the woman at the most exciting moment, just as she begins to get pulled back into the window. The entire moment looks fake, and it was.

The man’s name is Mamoudou Gassama – perfect for a News story from France about a Malian immigrant:

It appears as if we only get news stories from other nations when the date lines up with their independence day or national holiday. France’s holiday is Bastille Day, which is celebrated on July 14th every year. Measuring from Bastille Day to the date of this story:

47 degrees on the Freemasonic compass

In the reverse order, France sums to 115. When we measure to the Independence Day of the nation the immigrant is from, Mali, we get 115 days

Measuring instead to the most recent Bastille Day, we find it was exactly 319 days before this story:

Spider-Man also lines up with the date numerology of the release: