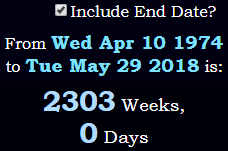 Missouri Governor Eric Greitens has resigned amid allegations of inappropriate conduct with women. Just like all athletes, actors, and celebrities, Greitens is participating in a massive psychological operation being employed against the people right now.

This is mindfuckery at its highest level – by crushing one famous personality after another with these accusations, the goal is to make the citizens of the world unsure of and suspicious of one another, believing anyone, including any well-off or highly-functioning person, is capable of being a predator.

It’s also no mistake Eric Greitens is in the news today – look at his age:

Today, he is a span of exactly 2303 weeks old. In numerology, where zero’s are ignored in the result, this represents the number 233, which is the 13th Fibonacci number.

13 is the primary ritual code, as I expose in post after post after post on this Blog. The last two celebrities to meet their doom in show business are “Morgan Freeman” = 130  (O) and “Roseanne Barr” = 130 (O)

This guy shares some numbers with Roseanne and Valerie Jarrett, who were in the news earlier today. For starters, he’s 1 month, 19 days after his birthday:

Greitens assumed office on January 9th, 2017. This means he’s been in office of 505 days

One more look at his age: 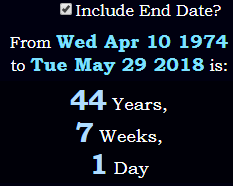 These are the only two numbers that sum to 144 in English Ordinal: