Alan Bean was the 4th person to claim to have walked on the Moon.

A very significant number to the Moon and Time is 19. Every 19 years, the Moon returns to the same spot in the sky, in the same phase. This period of 19 years, which contains 235 lunar months, is called the Metonic cycle.

Bean was a crew member of Apollo 12, the second mission to “successfully” reach the Moon. Measuring from the date of that launch, to the date he died, we get 48 years, 193 days.

Alan Bean spent 69 total days in space
The Apollo 12 mission occurred in ’69
Bean was born on, and died on, dates with 69 numerology

He died 6 months, 12 days after the anniversary of Apollo 12’s launch:

Alan Bean was the last surviving member of the Apollo 12 mission. The first man from that mission to die was Pete Conrad in early July of 1999.

Bean was sacrificed 226 months after Conrad:

Bean died a span of 73 days after his birthday.

The last time an Apollo astronaut who says he walked on the Moon died was in early January, when John W. Young died at age 87. Measuring from his death to the death of Alan Bean gives us a span of 142 days.

Here’s a list of all the astronauts who say they made it to the Moon and back: 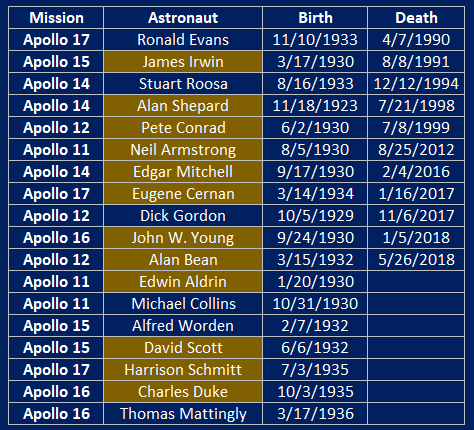 CNN gave us a fun headline:

457 is the 88th prime number. 88 represents the infinite loop of time

857 is a very significant Moon number as well. 223 is the Hebrew gematria for “The Moon” as seen above.

The Moon is the largest observable circle in the sky