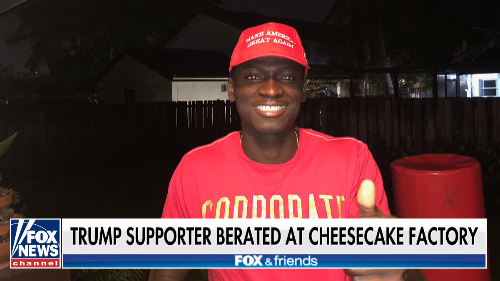 First off…virtually nobody who’s not being paid is wearing a hat in public that says “Make America Great Again”. There’s simply no way any normal, regular goyim is going out in public, showing off the fact that they like the absolute joke of a person that is Donald Trump. Sure, some people do like his politics, but not enough that they’re going to identify themselves with him.

Notice how his shirt says “CORPORATE”

This man is said to be 22 years old

We’re told that this man was harassed at the Cheesecake Factory. 113 is the mainstream’s favorite number of deception

The spokesperson who apologized was named Alethea Rowe

But 13 is the primary hoax code. This story about a Trump Hat took place in Miami on the 13th day of the month.

The guy’s name is Eugenior Joseph

211 is the 47th prime number. 47 degrees on the Masonic compass. The date also had 47 numerology: