James Paxton threw a no-hitter last night for the Seattle Mariners. This means within about six weeks of baseball, a no-hitter has been thrown in all three nations of North America – the U.S., Mexico, and Canada.

No-hitters are commonly called No-no‘s by TV analysts and commentators. So May 5th, written 5/8, was a fitting date for one to be thrown on:

This no-hitter is actually a Pi ritual. Let’s start with Paxton’s full name:

722 is the reflection of 227, which has everything to do with the circle. This number is so important, it’s coded into our nation:

A couple weeks ago, I made a post on the TV series 227. When the show debuted, one of the lead actors was 17076 days old. This is because the number is related to pi – add all permutations of 314 together and they sum to 1776

Paxton was 6 months, 2 days after his birthday:

Paxton was born and raised in Canada. This makes it interesting that he threw his no-hitter against the only Canadian team in the Major Leagues, the Toronto Blue Jays.

Paxton threw 99 pitches in his no-hitter. The 99th prime number is 523

He’s only the second Canadian to ever throw a no-hitter. The first time it happened was on 9/9/45

“Canadian” = 29 (R)
Dick Fowler, who threw that no-hitter, was a span of exactly 29 weeks before his birthday 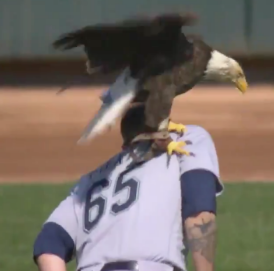 33 days before the no-hitter, the Mariners fell to 3-3 with a loss to the Twins. That alone would be no big deal – but in that game, a bald eagle landed on James Paxton.

Consider that Paxton wears #65, and the Eagles recently just won the Super Bowl

That game ended with a score of 2-4

It was 27 days before Seattle manager Scott Servais’s birthday:

The Moon has a 19-year cycle called the Metonic cycle