As I detailed in this post, Kanye West is a “Mainstream Jesus” – a celebrity coded with many of the same numbers of Jesus Christ, thus a character they commonly mock through numeric ritual.

When Kanye interrupted Taylor Swift at the 2009 MTV VMA’s, he was 268 days before his 33rd birthday.

This moment was truly the “sacrificial” moment in Kanye’s career. In a day, he went from being a superstar who’s made some questionable decisions and statements, to an outright lunatic. “Sacrifice” = 46 (R) 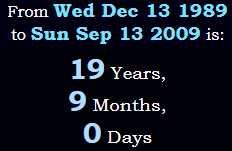 On the date of this incident, Taylor Swift was exactly 19 years, 9 months old

The birthdays of Kanye West and Taylor Swift are separated by 150 months, 5 days

The highest degree of masonry is the 33rd. This date had 33 numerology:

She was also exactly 237 months old