Last week, Kanye West stirred up more controversy with his comments regarding racism and victimhood.

Of course, it’s no coincidence Kanye made news on the date he did. A radio station in Detroit, Michigan, decided to pull his songs from the airwaves on May 3rd, the 123rd day of the year.

Kanye West, to the kabbalists, is representative of Jesus. This is because of the numbers he carries with him, which, for all we know are assigned. 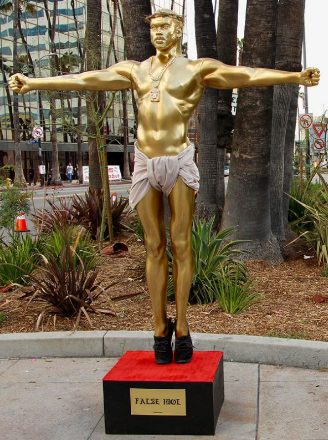 To illustrate my point, we will focus on two events – the sudden appearance of a Kanye West crucifix statue from February of 2017 (left), and the incident from last week in which Kanye’s songs were removed from the radio in Detroit in response to his comments.

For starters, both dates share one very obvious thing in common. The date the statue appeared, February 22nd, is the 53rd day of the year, and May 3rd, the date his songs were pulled, is written 5/3

In the Bible, it’s said that Jesus was crucified under an event perceived to be a solar eclipse

Of course, there’s a lot more to this. Kanye is one of a long line of rappers who are playing this role in the media.

In Hebrew, the full name of Jesus Christ sums to 38 in Reduction and 110 Ordinal

Kanye was born on a date with both 38 and 110 numerology:

Jesus, the son of God, is commonly perceived to be an allegory for the star at the center of our solar system, the sun

Jesus was crucified at the age of 33

On February 22nd, 2017, the statue on the left appeared in Hollywood.

Kanye was born in Atlanta on the 33rd parallel

1:23 on a clock is 83 minutes. Notice how the statue says “FALSE IDOL” at the base. Just last week, his songs were pulled from the radio in Detroit, Michigan

The date numerology here is perfect:

Measuring from the date this statue appeared to Kanye’s next birthday:

His songs were pulled from 105.1 The Bounce in Detroit.

On the date Kanye’s songs were pulled from the radio, he was 36 days before his birthday:

That date, 5/3, was also exactly 47 weeks after his previous birthday:

Measuring between these two dates, we find it’s one day past 62 weeks.