This is a story about a planned death ritual. Think about this in relation to the Google Doodle of Georges Méliès, which is a 360-degree video called “Back to the Moon”.

Basel is where this scientist has chosen to die. The Google Doodle for Georges Méliès was 80 years, 101 days after he passed away. and 8 months, 11 days after the American eclipse.

Today has reduced numerology and a life lesson number of 19. This is a number associated with sacrifice and death rituals. This is based on the 19-year Metonic cycle.

Today is the date leaving 242 days in the year:

Which means today is the 123rd day of the year:

This clinic has all sorts of numbers lined up for death and sacrifice. You have to wonder about the name Life Circle, considering all the symbolism and gematric matches with the Moon today, which is the biggest circle we can look at in the sky. I often wonder what role the Moon plays in our existence and if it has something to do with reincarnation. Maybe this article is giving us clues.

The Greek word for the Metonic cycle is “Enneadecaeteris”. Today’s Google Doodle is of Georges Méliès

Measuring from the anniversary of Switzerland’s establishment to the date of this news story: 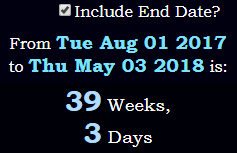 33 is the primary hoax code. While he’s pretty old, and this might not really be a hoax, there’s definitely some design to this story about Botanist and ecologist David Goodall

Today is 66 weeks, 6 days since Trump took office. It should seem relevant that it’s also 1 month, 11 days before his birthday, in light of the relationship between Ordinal and Sumerian gematria.