In my last post, I covered the numerology of the Puerto Rican C-130 plane crash today in Savannah, Georgia. On the front page of CNN is another story about problems with an airplane, albeit far less significant. Here, a Southwest flight had to make an emergency landing after a window on board somehow broke.

On April 17th, we got a hoax story about an engine explosion on a Southwest Airlines flight. See my work on that event – Post 2 – Post 3

That event occurred 33 days after Southwest’s founding date, and 303 days after the anniversary of their operations beginning. “Southwest” = 33 (R)

Well today is 48 days after their birthday:

This means their two emergency landings were 15 days apart. 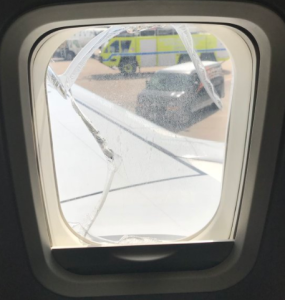 This picture was taken by Deepak Chawla, whose name matches today’s date numerology, which holds a 13 hoax code

His name in Jewish gematria sums to 1018, which lines up with the duration since the eclipse:

His name also shares gematria with Savannah, Georgia, where the big news comes from today with the C-130 crash.

Perhaps the cracked window is in tribute to that as well:

I pointed this out in regards to the Puerto Rican plane crash:

I also pointed this out: