A few years ago, the Brewers acquired a new General Manager named David Stearns. Not much is known about him…not even his birthday.

His bio page on Brewers.com says he’s currently 33. Either way, it appears as if old-school sabermetrics is out the window, and Gematria is in.

The Milwaukee Brewers appear to be the “Moon” team of the Major Leagues. For starters, the scoreboard, all the way back to the County Stadium days, would frequently show a “Moon Shot” graphic when a Brewer hit a home run. 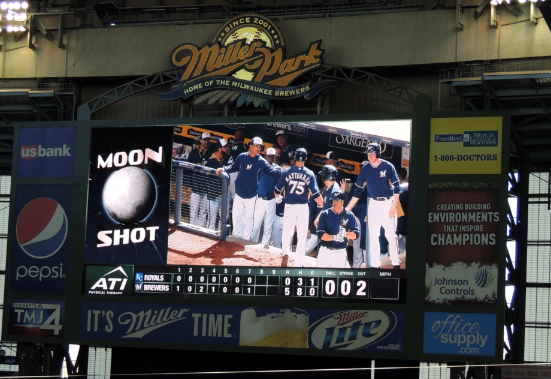 Let’s look at the owner of the Milwaukee Brewers, Mark L. Attanasio

I like the middle name of “L.” El is the ancient deity representing Saturn.

His birthday, September 29th, is the date that leaves 93 days in the year:

Turn the word EL upside-down and it becomes 73

Their current manager is Craig Counsell, whose C.C. initials reflect 3-3. He even wears #30 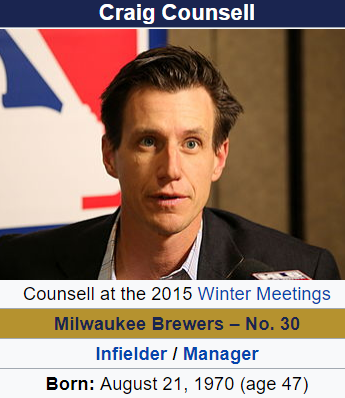 Check out his birthday. He was born in ’70 and turned 47 years old on the date of last year’s Great American total solar eclipse.

What allows us to predict the next eclipse is the Saros cycle. This cycle is a period of 223 synodic months, or lunar phases.

But of course, there’s more. Notice he was born in the year ’57

The Moon ranges 57 degrees in the sky. As a matter of fact, the city of Milwaukee won its only World Series in the year ’57, just 11 days after the current owner was born.

When I went to a Brewer game earlier this season, I noticed the Brewer player wearing #57 was on the ticket.

In the Reverse order, “Moon” sums to 51. It just so happens the Brewers have another pitcher who wears that number.

Their birthdays are 322 days apart, the inverse of 223

Perhaps 2018 is the year for the Brewers to find some success again.