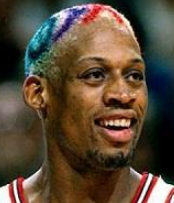 In my first post from today, I talked about how important the moon was to today’s ritual in Korea. This freakishly feel-good story comes as South Korean president Moon Jae-in invited North Korean Supreme Leader Kim Jong-un to step over the border, a favor returned by the portly dictator.

Over the years, Dennis Rodman has been one of the more famous catalysts in creating peace between North and South Korea.

Enneadecaeteris is the Greek word for the Metonic cycle, the 19-year cycle that syncs up the moon with the sun. No wonder he’s the guy for the job.

There’s another good reason he’s been chosen for this role. check out his age as of today, the date of the Korean truce:

The Korean Demilitarized Zone is at the 38th parallel

When Rodman made his first visit to North Korea, he was 2702 weeks old:

Today, the date of the Korean truce, South Korean president Moon Jae-in was 272 days before his next birthday:

I mentioned this number yesterday because we had both the story about Bill Cosby and the Google Doodle of Fanny Blankers-Koen.

Also noteworthy – the date was February 26th, written as 2/26. This is a number closely connected to 33

This date was also a span of 2 months, 18 days before Rodman’s next birthday.

Rodman’s next trip to North Korea was 113 days after his birthday.