Erin Popovich, the wife of the coach of the NBA’s San Antonio Spurs, Greg Popovich, passed away on Wednesday. I can’t find her middle name or date of birth anywhere.

She died the same day as Bruno Sammartino, which makes this interesting to be:

The name “Erin” has some other interesting numbers.

I hope not too many people see their name on my blog and get worried. These rituals are (almost) exclusively designed for those who have signed their souls away…or hoaxes.

Could this be some sort of hoax? I think it might be. Consider that 113 is the mainstream’s number of deception.

The Warriors beat the Spurs with 113 points in their first playoff game on April 14th. Gregg Popovich was 11 weeks, 3 days after his 69th birthday on the date his wife died: 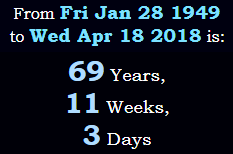 Meanwhile, the Warriors have scored 229 points in those same two games. The 229th verse of Revelation reveals the Number of the Beast

This means the two teams have combined for 422 points.

The date 4/22 is coming up pretty soon. That will be 244 days after the eclipse:

The Warriors play the Spurs in Game 4 on April 22nd. This seems to indicate the Spurs, already down 2 games to 0, will be “killed” on the 22nd, doesn’t it?

The Spurs won 47 games during the regular season.