A Southwest flight had to make an emergency landing in Philadelphia after an engine explosion. The video in the above link is a clip from CNN that (currently) begins at 12:23 p.m.

This is one day after Philadelphia 76ers legend Hal Green passed away in relation to the Super Bowl victory of the Philadelphia Eagles:

I guess “the Eagle has landed” or something.

The newscaster in the clip even expresses disbelief. He says the passenger was hit by “a bit of shrapnel that flew off from the left part of that engine somehow ended up injuring a passenger on board.”

Exactly. How the hell does shrapnel from the engine injure a passenger? Did it break through the cabin? Apparently the cabin is said to have lost pressure, and it sucked a woman up into the hole. And people used jackets to cover it…no chance.

They’re saying as a result of the engine explosion, “shrapnel hit the window, causing a serious injury.”

It was 303 days after the anniversary of their operations first commencing:

It was 33 days after Southwest’s 51st birthday:

The person who sent out the Tweet that’s being aired on the news everywhere is named Kristopher Johnson, whose Twitter handle is:

His name has both the Krist and the son in his name. Not to mention the Johnson, of course, for the sexual innuendo. 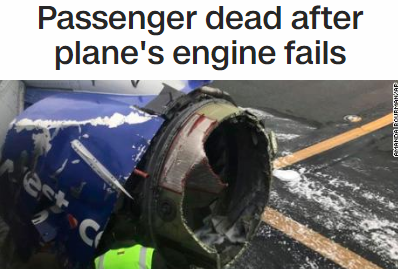 The 156th prime number is 911. The last time somebody died in the United States on a commercial airliner was when one person is said to have been killed on Asiana Airlines Flight 214.

Measuring to this incident from the fourth anniversary of that bad landing in San Francisco:

Amazingly, almost the exact same thing happened to a Southwest Airlines flight in August of 2016. Measuring from the first anniversary of that incident to this one:

Amazing that the NTSB never even named the model of the engine that blew up in 2016…how could that possibly be?!

Measuring from the Colgan Air Crash to today’s explosion:

13 is the other primary hoax code. This headline gives us two roundabout links to 13 in its basic gematria.

There’s relevant gematria in this headline using the Jewish order as well:

257 are reported to have just died in a plane crash in Algeria less than one week ago.

This headline also sums to 5722 (Jewish)