Yesterday, in this post summarizing the numerology surrounding the shooting’s date, I mentioned how significant the number 45 was to the ritual. YouTube was founded on the 45th day of the year (same date as the Stoneman Douglas shooting), and just turned 13 years old.

I even posited that this is why we were told the shooter was a female:

45 is the sum of the magic square of Saturn. “Saturn” = 93 (Ordinal), and no doubt this was a heavy Saturnian ritual. So isn’t the name of the shooter, Nasim Aghdam, so appropriate?

Speaking of 13…the Bavarian Illuminati was founded with 13 families on a date with 99 numerology. “Thirteen” = 99 (Ordinal)

131 is the 32nd prime. Amazing how often the shooter’s name syncs up with the city they shot up:

YouTube is owned by Google. So isn’t it curious that we get a Google Doodle today celebrating a woman’s 90th birthday, in light of the Ordinal gematria of the shooter? 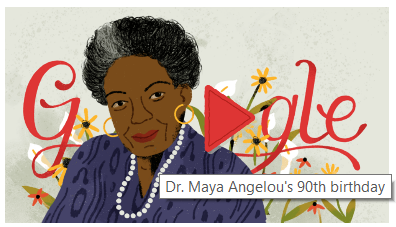 I also revealed how this shooting was partially in homage to the total solar eclipse of August 21st. It was 7 months, 13 days after that eclipse. “Total eclipse” = 713 (Extended)  |  “Saturn” = 713 (Hebrew Gematria)

That makes this pretty interesting to me: there’s a new connection between Saturn and Eclipses I hadn’t noticed before.

“One hundred thirteen” = 207 (English Ordinal)
113 days into the mayor’s term – YouTube’s first video uploaded on the 113th day of the year.

It’s no secret YouTube is affiliated with the Society of Jesus. Like CNN, the red-and-black gives it away.

This shooting fell 177 days before the Jesuit Order’s birthday:

This is actually kind of funny because the only person she “murdered” was herself.