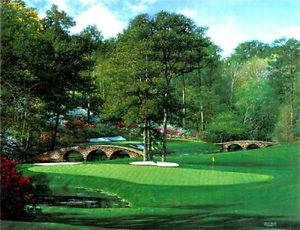 This is why I don’t get far in predicting sports – I did a little research on the Masters and came across this guy named Larry Mize. I saw him on the list of previous champions, but never heard of him, so I looked him up.

It turns out he’s the only player ever from the city of Augusta, Georgia, to win the Masters, which is held annually in Augusta. The city is a bit more populated than I thought, with nearly 200,000 people living in the area, but the odds of a hometown golfer winning are still very unfavorable.

Did he win fairly? Well, of course not – I’ll show you why he was chosen for this. First, take a look at his winning shot from the 1987 playoff and just ask yourself if everything looks legit:

If you play golf, you wish your ball could get that much roll. It sure looks like this technology has been around for quite some time. It’s not as if green is hilly – here’s a closer look at it:

So in my last post, I discuss how connected Augusta and the Masters is to the Moon, and particularly this year, to the Great American total solar eclipses. Well, there’s a good reason this man was chosen to win the tournament at the age he was at.

Larry Mize’s name matches up nicely with his home state:

One of the men he beat in the three-man playoff was:
“Seve Ballesteros” = 179 (English Ordinal)

His name and birthday have all sorts of alignments with eclipse numbers too:

He was born on a date with 109 numerology:

The Hebrew term equivalent to “total solar eclipse” sums to 280 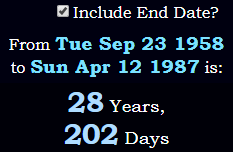 The other man he beat was Greg Norman, whose nickname leaves a little to be interpreted:

Measuring from this win to the Great American total solar eclipse:

There are 1189 chapters in the bible.