In my last couple of posts, I’ve noted odd repetitions of the number 1703 in suspicious news stories:

I also mentioned how 173 is the 40th prime number. Well it just so happens the Masters is this coming weekend:

In light of my decode of the bizarre news story involving Jim Brown returning Stan Lee’s missing Pomeranian…we know the media foreshadows sporting events in news articles. I believe this is the case here. But here are some more things to look for if you plan on trying to predict a winner.

The fourth and final day of the tournament is Sunday, April 8th. This is the same date as the second Great American total solar eclipse in 2024. This date is also specially connected to the August 2017 eclipse: 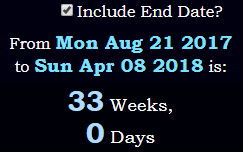 Augusta, Georgia is located on the 33rd parallel.

The Masters Tournament appears to be some sort of Moon-related ritual.

Eclipses are predicted thanks to the Saros cycle, a period of 223 synodic months.

The tournament is held in the city of Augusta, Georgia.

In this post, perhaps one of my most important, I discuss why 1331 is the number that represents a total solar eclipse. This is attributed in the tournament’s Jewish gematria:

The Moon’s diameter is essentially 2,160 miles.

And then you have this:
“Two thousand eighteen Masters Tournament” = 503 (Reverse Ordinal)

So, for whatever reason, I’m inspired to look through the field of 87 players and try to maybe pick a winner. I’ll probably be wrong, but at the very least, we’ll learn a lot.