It was exactly 2205 days before the next Great American total solar eclipse:

The moon never comes closer than 225,000 miles to the earth. It’s also a significant number in chronology: 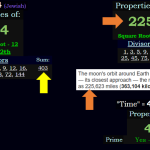 It was a span of 218 days after the previous Great American total solar eclipse:

He was playing for the “G” league. Freemasonry’s emblem has a “G” – some believe this stands for “Geometry”. They do treat God as the Great Geometer.

March 26th is actually a good date for this type of ritual. It’s the 85th day of the year, leaving 280 on the calendar.

Without the S exception:

Zeke was a span of 43 weeks, 3 days after his birthday 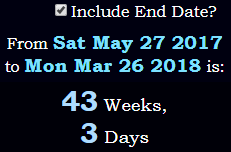 Although he died on the 26th, he actually collapsed in the final minute of a game on the 24th. That was the 83rd day of the year.

The date also had that fateful 38 numerology

I always talk about 24 and 42 being used in racial propaganda and rituals. Check out his birth numerology:

“Zeke” was born on a date with 52 numerology