In light of my prediction last week that a black celebrity would die on Sunday, March 18th, it’s interesting that we are getting another story about a black man being questionably killed by police on that date.

This occurred in Sacramento, California. It was 19 days after their birthday:

The name of the victim, Stephon Clark, has double gematria of 142

In a picture of Stephon Clark the media is circulating, he’s wearing a hoodie that says “The North Face” 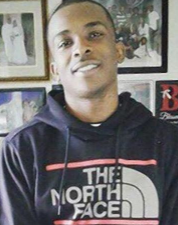 I can’t find an obituary for him, or a birthday. They’re saying he was 23 years old, dead on a date with 23 numerology

This date also had 30 numerology

The name “Stephon” has overlap with some familiar numbers having to do with death:

Sacramento is on the 38th parallel.

The mayor of Sacramento is Darrell Steinberg.

Nice-looking fellow. Check out how old he was on the date of the shooting:

Rotate these numbers 180 degrees. What word does it form?

713 is also the Hebrew gematria of the planet Saturn:

Saturn is coded into government propaganda:

Steinberg took the mayor’s office on December 13th, 2016, meaning he was in office for 15 months, 5 days

This is also exactly 460 days

Take a look at the wild gematriot of the mayor. I often talk about 13 and 33 and how they relate to Freemasonry.

And the mayor of Sacramento was 211 days before his birthday:

The Synagogue of Satan is mentioned in the book of Revelation, which has 404 verses

Sacramento is on the 121st meridian