EDIT: (everything below this top section was posted on February 25th)

There was no false flag on 3/1, however, the Austin bombings began on March 2nd. We just didn’t hear about them in the national media until March 12th, when the second and third bombs exploded.

I’ve made several posts about the Austin bombings – here is a summary, and here’s more in regards to WWE wrestler Daniel Bryan’s connection. The same 2230-day measurement below applies to March 2nd when the end date is included.

The creator of the show is Ryan Murphy.

3/1, written 1/3 in most parts of the world, falls exactly 13 weeks after his birthday:

This will be his age on March 1st:

There’s 1984 days between the birthdays of George W. Bush and Dick Cheney, who were sitting president and vice president on 9/11/2001.

1109 is the 186th prime number. The other show creator with a listed birthday is Tim Minear.

Trump was the winner of the 58th presidential election and was inaugurated on a date with 58 numerology.  March 1st completes Trump’s 58th week in office 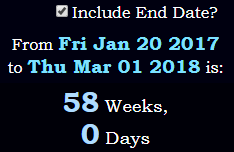 It will be 3 months, 13 days before Trump’s next birthday:

This also equates to 15 weeks, or 105 days. March 1st will be 15 days after the Stoneman Douglas school shooting.

There are exactly 331 kilometers between the 9/11 memorials at the World Trade Center and Pentagon.

But what really makes this date interesting is how it measures up to the Great American total solar eclipses.

Measuring to the date of the second eclipse from March 1st:

There are 223 synodic months in a Saros cycle

Measuring instead from this past eclipse to March 1st:

Including the end date, this would be 193 days. That’s the 44th prime number.

March 1st will be 1903 days after the Sandy Hook shooting

Look at the wild rating statistics for that episode:

This results in 9.99 million total viewers