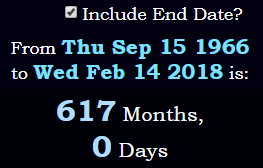 A little bit ago, I accidentally typed “Sherman Douglas” instead of “Stoneman Douglas” when referring to the school shooting. I figured this was probably a famous person whose name was stashed somewhere in the recesses of my brain.

Well it turns out there was a former NBA player from the 90’s with that name, and the reason it probably rings a bell is because he spent a few seasons with the Milwaukee Bucks.

Check out this guy’s age on the date of the shooting:

617 is the 113th prime number. That’s the mainstream’s number of deception.