They changed the death toll from 66 to 65. This is still relevant to Revelation – the 65th prime number is 313

But as some people say, I guess you can do anything with numbers…

Revelation is the 66th book of the Bible. The plane took off from Tehran.

Revelation talks a lot about the Beast and its mark.

The plane was en route to the city of Yasuj

The plane crashed in Kohangan village

This was near a bigger town named Semirom

There are a few elements of this story that make me wonder if it’s a hoax. First of all, the name of the airline is AseMAN Airlines, and the Man and the Son are the two main hoax words. The pilot’s name was Hojatollah Fooled. Fooled? Like as in, fooling the public?

In Revelation, the rulers in end times are:

223 is the 48th prime number. Check out how old Aseman Airlines is: 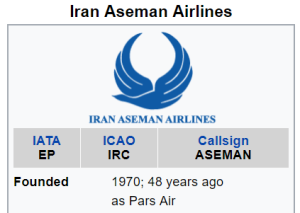 With number calculation on:
“Passenger plane crashes in Iran with 66 aboard, report says” = 347 (Reverse Full Reduction)

The guy CNN put on TV to talk about the crash was named Sam Kiley.