The Paris attacks that occurred on Friday, November 13th, 2015, were in tribute to the round-up and arrest of the Knights Templar on Friday, October 13th, 1307.

The proper full name of the Knights Templar is:

This translates into Latin as:

13 is one of the primary hoax codes. 130 people are said to have been killed in the Paris attacks.

The other primary hoax code is 33, which factors to 3×11. This came 311 days after the Charlie Hebdo attacks in Paris.

The band playing at the time the shooting began was the Eagles of Death Metal, who are from Palm Desert, California

The date of the shooting left 48 days in the year.

Some people within masonry claim their heritage traces back to the Knights Templar. Which makes this interesting:

Wikipedia really works hard to prove that it’s tied to this masonic order running the world. Check out when their picture of the Eagles of Death Metal is from: 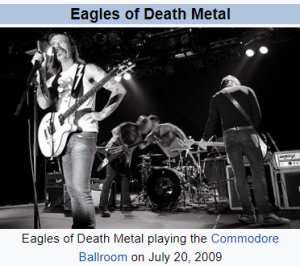 Measuring from that date to the date of the Bataclan shooting, which is really the only reason anyone gives a shit about any of these sell-outs:

The lead singer of Eagles of Death Metal is named Jesse Hughes.

The owners of the Bataclan also had similar connections:

When the shooting began, the Eagles of Death Metal had just begun playing a song called “Kiss the Devil.” Appropriate.

89 people died in the Bataclan (supposedly). 89 is the 11th Fibonacci number. This building was in the 11th arrondissement in Paris.

Where there’s Zionist false flags, there’s Jewish fingerprints. Check this fact out about the Bataclan:

Jews owned the Bataclan for 40 years before selling it on September 11th of that same year. Think they knew something? Remember who took out that big insurance policy on the Twin Towers:

He bought the World Trade Center 1 month, 19 days before the attacks.