In the Special Presentation I uploaded on 11/9/2017, I begin by mentioning how the 77′ Pentagon on the 77th meridian was hit by Flight 77 exactly 77 minutes after takeoff at 777 feet per second.

Well now there’s one problem…apparently the Pentagon got shorter.

Growing up, I always remember hearing that old people would lose an inch or two in height due to their spine compressing over time. Apparently this applies to buildings now too.

Even the Wikipedia editor seems confused. They used to have an exact measurement, all the way down to half of an inch:

It’s now been changed to:

Google reflects this as well: 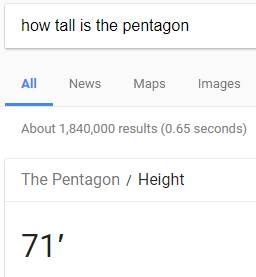 Thanks to Dezy for this hilarious observation:

No wonder the Jews changed it to 71′.

I thought they might do this after my video was uploaded…but it’s still surprising to see. They are literally changing numbers, in fear of the people waking up.

And they said we can’t make a change? It’s a start…