Special thanks to Danielle Wiener-Bronner for this article over at CNN.

Kristallnacht, or “Night of the Broken Glass”, is the name given to an attack from the Nazi party in 1938 on Jewish businesses in the nation.

This story was published on the same date that the U.S. government released a number of documents related to the 9/11 attacks:

KFC was founded by Colonel Sanders, whose full name was Harland David Sanders.

Kristallnacht began on November ninth, the date written 9/11 or 11/09.

Tisha B’Av is the Jewish holiday that occurs on the 9th day of the 11th month of the civil calendar. The holiday commemorates the destruction of the first Two Temples – this is reminiscent of the ritual on 9/11 back in 2001, when the Twin Towers were destroyed.

This is the number that connects Colonel Harland Sanders to 666. 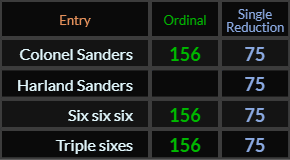 The number 666 has matching gematria with Kentucky Fried Chicken, as well as the headline CNN gave us.

Colonel Sanders was both born on, and died on, dates with 108 numerology: