That eclipse occurred on a date with Primary numerology of 66, which left 132 days in the year:

A total of 132 people are said to have been killed when the plane made by The Boeing Company went down:

The plane involved was a Boeing 737. Over the past few years, Boeing has found a lot of trouble with regulators after two of their new 737 MAX models crashed – LionAir Flight 610 and Ethiopian Flight 302, forcing the remaining planes to be grounded. Those crashes happened 132 days apart:

Back in the ’90’s, The Boeing Company cemented its spot atop the western aviation world when it merged with its chief rival. That happened on the 213th day of the year, which is similar to how today’s date, 21/3, is written in China:

McDonnell Douglas merged with The Boeing Company on August 1st, or 8/1.

Somewhat surprisingly, this is actually the third-deadliest airplane crash to ever occur within mainland China. Only once has a Boeing crashed in China with more people on board – that was China Southern 3943 in 1992 (also a 737). Today’s incident occurred in Southern China, but the airline involved was China Eastern.

Today is also a span of 10710 days since that crash. This is somewhat similar to the callsign of today’s fallen craft, which was B-1791. Boeing’s merger was with McDonnell Douglas.

This stands out because it’s also been exactly 1071 weeks since 9/11, the worst combined air disaster in history. Furthermore, today also falls 171 days after China’s National Day: 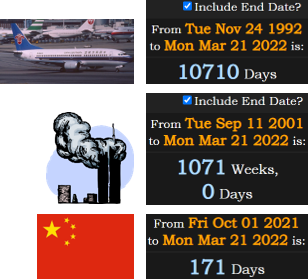 Today is a span of 177 weeks, 1 day since the LionAir crash and 1107 days since the one involving Ethiopian Airlines: 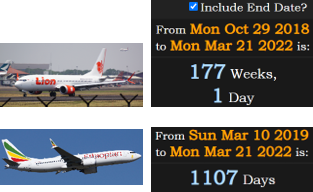 Although September 11th is written 9/11, “Septem” means “Seven” in Latin, as September used to be the 7th month on the Roman calendar. This means the date would be written as 7/11.

China Eastern was founded on a date with 119 numerology:

The merger happened in the year ’97