Amanda Kloots is the widow of Nick Cordero. Cordero died in 2020 after a long battle with pneumonia, which was ultimately attributed to Coronavirus. To this day, Cordero is still the only celebrity I can think of who was otherwise young and healthy that was reported to have died from the disease.

Kloots and Cordero had a son named Elvis together. This is noteworthy because Elvis was the first person to be vaccinated on live television: 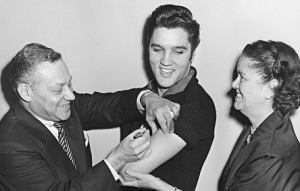 Kloots and Cordero met while both were working on Bullets Over Broadway, which was written by famous director Woody Allen. Allen’s autobiography, titled Apropos of Nothing, was released a few months before Cordero died.

Allen’s birthday is November 30th, which is the date of the major 1331 eclipse that is the root of the “Corona” code. This post will examine how Cordero’s death, as well as today’s news story, is a numeric riddle connected to Woody Allen.

News of Amanda’s illness, for which she has no real symptoms, falls on the date leaving 309 days in the year:

Woody’s November 30th birthday falls on the 334th day of the year:

This is the Ordinal gematria of his autobiography.

Amanda announced her diagnosis yesterday on February 24th, the date written 2/24. The second Great American Eclipse falls in the year 2024.

In Reduction, Coronavirus sums to 56.

Elvis got his televised vaccine injection in ’56. Today, when the media published the news, is the 56th day of the year:

Amanda Kloots is the widow of Nick Cordero. Cordero died in 2020 after a long battle with pneumonia, which was ultimately attributed to Coronavirus, on the 187th day of the year:

Today has Primary numerology of 69 and 33:

These numbers connect The Jesuit Order to the Eclipse code:

Both Jesuit and The Jesuit Order have gematria of 78.

Kloots and Cordero met while working together on a play called Bullets Over Broadway. The Musical was adapted from a film of the same name, which was released on the date leaving 78 days in the year:

Nicholas Cordero was born in the year ’78, and Amanda was born on the 78th day of the year:

In Reverse, Cordero and Musical share gematria of 666. This is a very important Eclipse number.