This is all synced up with Curry’s record-breaking game against the New York Knicks that I posted about in December.

Steph Curry, whose real name (like his father) is Wardell Curry, sank 16 three-pointers during last night’s game, which was won with 163 points and lost with 160.

Curry was born in ’88, a number made up of all circles, meaning he was born on the first “official” Pi Day.

Last night’s game was on the date leaving 314 days in the year:

Stephen Curry, whose father Dell was born in ’64, shined in Cleveland, Ohio on a date with 64 numerology:

Curry’s 16 threes are significant for another reason. Sixteen is the first number to have gematria of 33, which is Curry’s age:

He broke the NBA’s all-time 3-point record in New York, and broke the single-game record in Cleveland.

Steph Curry has great gematria to be the 3-point king.

Recall how well Steph Curry‘s name syncs up with Three pointers and Three-point shots. He has the most in the history of the game. 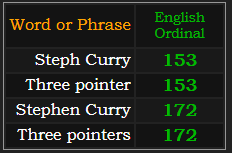