Although the media is reporting that the death of John Madden was unexpected, those of us who understand numerology knew this would be coming. Check out my recent live stream from November (1:07:00) that explained why Madden, who coached the Raiders to a Super Bowl championship, was likely to die within the next year as part of the riddle involving the Las Vegas Raiders going to Super Bowl 57. Recall how Raiders FB Steve Smith died the same day Bo Jackson was added to the cover of Madden.

Not only did Reid represent Nevada, where he was born, but the Las Vegas airport was renamed after him just two weeks before he died:

An airport is a hub for Travelers. The ancient Greek god of Travelers was Mercury:

Notice how Mercury was also the god of Communication. That’s relevant to John Madden, who spent over 25 years explaining the world’s most technical sport to a worldwide audience.

Mercury is considered the “messenger” because is the planet that orbits the Sun in the least amount of time, just 88 days. Additionally, the Magic Square of Mercury is 8×8:

Super Bowl 57 falls 57 days before what would have been John Madden’s 88th birthday.

The very first Madden video game was released in the year ’88:

The game’s release date was June 1st, which falls in the time of Gemini, ruled by Mercury. The other sign ruled by Mercury is Virgo, which is when the NFL season begins.

Mercury is closely-associated with Jesus the Messiah.

All Madden on Christmas

His death has curious timing. Just three days before he died, FOX aired a special documentary called All Madden on Christmas, the day we celebrate Jesus’ birth:

He died in Pleasanton, CA.

While Madden is the most beloved coach in Raiders history, perhaps the opposite could be said for Jon Gruden, who lost his job as the Raiders head coach in October after some unflattering e-mails of his surfaced. Both coaches share a first name, and their names end with “-den“.

John Madden Football‘s initial release was on a date with Primary numerology of 114:

The documentary was called All Madden. The first-ever Super Bowl capped the ’66 NFL season.

This contains an upside-down 666, which is the sum of the Magic Square of the Sun, which is representative of Jesus, the Son of God:

Jesus was resurrected into Heaven on the third day after crucifixion.
Madden died three days after his documentary aired on Christmas.
Christmas fell three days after the release of Matrix Resurrections. On that holiday, Aaron Rodgers, who dressed up as Matrix lead actor Keanu Reeves for Halloween, broke Brett Favre‘s all-time Packer touchdown record.
John Madden was notorious for his love for Brett Favre, who was born in 1969, the same year Madden was hired. Favre was 19069 days old when All Madden aired on television.

John Madden died 232 days after the birthday of his broadcast partner Pat Summerall, and 232 days before Jon Gruden’s birthday:

He died yesterday on a date with Standard numerology of 61:

John Earl Madden just had a documentary about his life air on Christmas. The QB for the Las Vegas Raiders is Derek Carr, and Madden died the same day as Harry Reid. 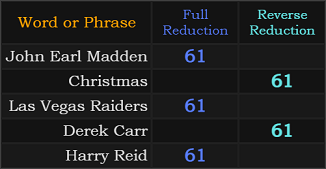 Madden won one Super Bowl during his time with the Raiders.

Madden died on a date with numerology of 18:

Perhaps no one name is more synonymous with any sport than Madden is with the National Football League, as his death at 85 shows.

The NFL is a 32-team league. Madden, who became the league’s youngest coach in history at age 32, won his only Super Bowl by an unusual score of 32–14:

For nearly half a century, the Raiders were owned by one of the most colorful personalities in football, Al Davis. Just one day before the death of John Madden was announced, we learned that Raiders lineman Bruce Davis, who won two Super Bowls with the team during the 80’s, passed away:

His next birthday falls on a date with Primary numerology of 56:

John Madden was first hired as the Raiders’ head coach in 1969, the same year as the first Moon landing. He was inducted into the Pro Football Hall of Fame the same year as Warren Moon. His Video game franchise now has exclusive rights to the NFL.

Madden died on a date with Primary numerology of 81:

There are 81 squares in the Magic Square of the Moon, which sums to 3321, the 81st Triangular number:

The scientist who allegedly took us to the Moon was “Wernher Magnus Maximilian Freiherr von Braun” = 3321. You may recall that Joe Montana was exactly 3321 weeks old for the Montana Bowl. Joe was born on a Monday was drafted in 1979, the same year as a Total Eclipse over Montana.

There are 223 lunar phases in The Moon‘s Saros cycle. This is also the Hebrew value of Las Vegas, Nevada.

The game falls on the date leaving 322 days in the year, 322 days after Derek Carr’s birthday, and 3202 days after he was drafted. Raiders coach Rich Bisaccia will be 2 months, 23 days before his birthday. There’s a lot more connected to Eclipses but you get the drift.