“Three point” = 457, the 88th Prime number. Curry was born in the year ’88, the number that represents the daily passage of the Moon and the Sun: 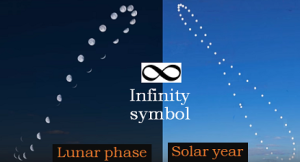 88 minutes on a clock is 1:28. The record he broke was previously held by Ray Allen.

The key to this story is obviously the number 3, as Steph Curry has broken the NBA career 3-point shooting record. A solar Eclipse is the intersection of the two largest Circles in the sky.

He broke the record in New York.

See my video from last year which explained how the Warriors’ championship run, which began in ’15, was all connected to Phi and Pi.

He broke the record at the age of 33 years, 9 months, exactly 339 weeks after winning his first NBA Championship in ’15:

33 is closely-linked to 666, the gematria value of both Mathematics of the circle and Mathematical perfection.

The Warriors and Knicks combined for a total of 201 points.

666 is connected to the Eclipse code

Tonight’s game against the Knicks fell on the anniversary of last year’s Total solar eclipse.

Just one night ago, the Warriors earned their 22nd win in a game that finished with 202 points. Curry’s record three-pointer scored the 22nd point of the game, and he finished with a total of 22 points on the night.

The date has Primary numerology of 67:

Today also has Standard numerology of 47:

Not to be outdone, today also has numerology of 13 and 31:

1331 is the ultimate Eclipse number

In 2020, I made this post explaining how Eclipses that are separated by 405 Moons often have points of Greatest Eclipse in close proximity, as these two examples demonstrate:

The Eclipse code is special to the Society of Jesus, whose emblem appears as if it were an eclipsed Sun: