Last week, an NFL replay official died on his way back from a game involving the Chiefs, who played in the last two Super Bowls. I was unable to find a birthday for Carl Madsen, but I did stumble across this Wikipedia page for a Dutch politician named Carl Madsen.

There’s virtually no Dutchmen to have ever played football in the NFL. However, there’s a short list of Dutch MLB players, seven of whom are active. One of them is Braves second baseman Ozzie Albies, who happens to be playing in the World Series: 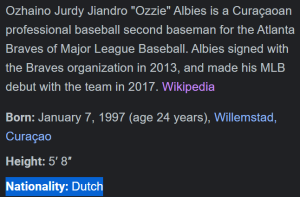 The politician died in ’44

Ozzie Albies, who is currently 24 years old, has the right type of name for a big World Series moment.

24 years ago, in the same year Ozzie was born, Darren Daulton, whose nickname was Dutch, won his only World Series. Daulton died at age 55 just 5 days after Ozzie Albies made his Major League debut. Their birthdays are separated by a span of 5 days.

Darren’s death fell on a date with 24 numerology, which left 147 days on the calendar:

The same year Darren died, the Houston Astros won the World Series, the same team the Braves are playing this year.

Darren, whose birthday has numerology of 22 and 12, would be a span of exactly 3,122 weeks old. Darren wrote a book about mysticism which makes special mention of the date 12/21/2012, or the end of the Mayan calendar. Worth noting that Adam Duvall, who has 120 birth numerology, is 12112 days old.

The name of that book is If They Only Knew.

The Braves, whose first World Series home game fell on 10/29, have not won the World Series since Ninety-five and last appeared in the Fall Classic in Ninety-nine.

Darren’s open mind and desire to speak his truth remains an inspiration to my work. See my tribute to him from last year, which appropriately occurred by the numbers as well.