This occurred at a Kroger grocery store. The founder of The Kroger Company was Bernard Kroger, a man who I already featured in a video this year (Click here to watch).

The shooting in a suburb of Memphis, Tennessee fell on September 23rd, which is the date leaving 99 days in the year:

In Jewish gematria, The Moon sums to 283.

The current CEO of Kroger is Rodney McMullen.

The shooting fell 6 months, 1 day after another mass shooting at a Kroger supermarket, King Soopers:

Both Collierville and Memphis have interesting Jewish gematria that connects to the Moon as well.

The Moon has an equatorial diameter of 2160 miles:

This occurred in a suburb of Memphis, Tennessee.

The town this grocery store is in is called Collierville, which has matching gematria with Solar eclipse.

Recall how Marge gets blinded by a solar eclipse in the 433rd episode of the Simpsons: 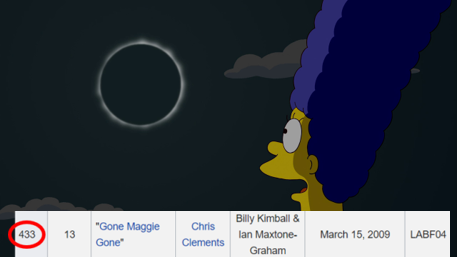 Kroger is headquartered in Cincinnati, Ohio, which is coded with numbers of the Moon’s Metonic cycle, which lasts 235 lunar phases and 254 sidereal months.