The date of this incident in Washington, District of Columbia, the capital of 50-state America, had Standard numerology of 50 and 14:

Up until last year, this was an important number to the city of Washington’s football team.

The 229th verse of Revelation reveals the number of the Beast.

Today has Primary numerology of 70:

The bridge collapsed over Interstate 295.

The city of Washington, D.C. has matching gematria with Total eclipse.

Today is the date leaving 191 days in the year:

I surmise that the Jesuit emblem is symbolic of a total solar eclipse. 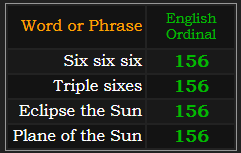 This is the Ordinal value of Pedestrian bridge.

Sadly, CNN would not indulge me.

See my post on the deadly bridge collapse in Genoa, Italy back in 2018.

The other major news story I made a post on today was about the death of John McAfee, which appeared to be connected to Pat McAfee, who recently started a commentary role on WWE Smackdown.

Today is 52 days after McAfee’s birthday:

The deal was first announced on a date with Primary numerology of 52:

Today has alternate numerology of 52: