When posting anything about Coronavirus, I almost always end up pointing out how the Sun’s atmosphere is called the corona, and it’s only visible during a total eclipse. Today, a star player from the Phoenix Suns allegedly tested positive for Coronavirus, so of course it’s by the numbers.

The most-frequently coded number around the Coronavirus is probably 56. To list just a handful: 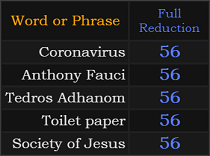 Chris Paul is often referred to by his initials, CP. Today has Primary numerology of 63 to match:

On May 11th this year, which can be written 11/5, the Department of Homeland Security announced a new organization, the Center for Prevention Programs and Partnerships, called CP3 for short.

Christopher Emmanuel Paul (a nice trifecta of biblical names) was born on a date with Primary numerology of 115:

Today is the date leaving 198 days in the year. His number Three and Beast both sum to 198 Latin gematria:

The number of the Beast is revealed in the book of Revelation, which has matching gematria with COVID Nineteen.

Revelation is the 66th and final book of the Bible.

The book is about the Revelation of Jesus Christ, and of course CP3’s first name is Christopher.

Chris Paul sums to 471 in Jewish, matching the Satanic value of Revelation.

The verse that describes the four Beasts has Reduction gematria of 471:

The above verse is Revelation 4:7

The number of the Beast is revealed in the 229th verse of Revelation. The Beast is given power to rule for 42 months.