In my last post, I showed how the death of an actor from the TV series Oz was connected to Dr. Oz, The Wizard of Oz, and rapper 50 Cent’s beef with Young Buck.

muMs da Schemer died at the age of 52.

The creator of Oz is Tom Fontana.

Fontana’s wife, Sagan Lewis, was born in the year ‘52. She passed away from cancer a few years ago. Their relationship was rather unique – their first marriage ended in 1993, but they got re-married about a year before her death.

Look at how well her name overlaps with Craig Grant’s:

Craig Grant was born in ‘68 and died on a date with Primary numerology of 68:

Craig Grant played Arnold Jackson on Oz. My post also shows how his death was connected to Curtis Jackson (50 Cent) and Bashar Jackson (Pop Smoke) through the numbers 163 and 38. 50  Cent was 16300 days old when Pop Smoke was killed. 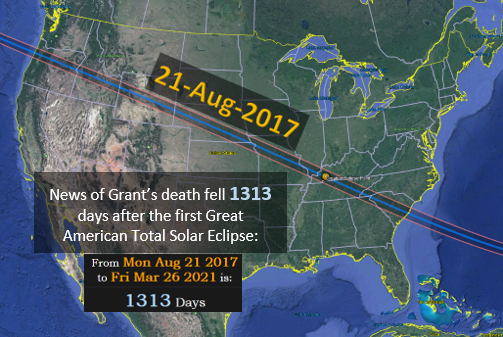 That eclipse was on the 233rd day of the year:

A primary eclipse number is 666. That news was also 6606 days after the last episode of Oz. My last post shows a myriad of other connections with that number. Sagan Lewis died on August 7th, or 8/7.

The Wizard of Oz was written by L. Frank Baum.

The ultimate eclipse number is 1331. The 1331 eclipse occurred on November 30th, which was Sagan Lewis’s birthday.

The number 1331 does not appear in succession within the digits of Pi until the 16019th digit. I mentioned this recently when pointing out that Anthony Fauci was 16019 days old when he took over at NIAID.

The full name of the author of The Wizard of Oz is Lyman Frank Baum.