Rush’s middle name is Hudson. He died 21188 days after the Miracle on the Hudson:

Rush was 37 when his talk show debuted

73 is a number we often see coded around death.

On 7/3 last year, President Trump visited Mount Rushmore when he was 888 months old. That was the 185th day of a leap year:

Donald visited Mount Rushmore on a date with Primary numerology of 50:

Rush was diagnosed with lung cancer on the third anniversary of Trump’s presidency. The 229th verse of Revelation reveals the number of the Beast to be 666.

Read about the full eclipse riddle

Limbaugh’s full name is actually Rush Hudson Limbaugh III. The man who piloted the Miracle on the Hudson is also a third, or III. As I’ve been pointing out a lot recently, III = 999, an upside-down 666. This came up in recent decodes of Ken Jennings III, Carlton Davis III, and older ones of 50 Cent (Curtis Jackson III) and Bill Gates III. 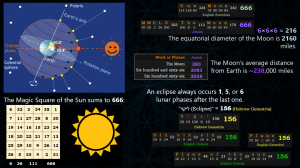 6×6×6 = 216. The conservative president who was elected in 2016 was Donald Trump, who has matching Reduction values with six six six. Trump gave Limbaugh a Presidential Medal of Freedom during his final State of the Union address.

Limbaugh died on a date with 60 numerology, the 48th day of the year:

Neil Peart, the Rush drummer, died on a date with Primary numerology of 48: