Siegfried Fischbacher of the famous Siegfried & Roy duo has passed away.

For well over a decade, Siegfried & Roy held their Las Vegas show at The Mirage.

The death of Siegfried Fischbacher fell on a date with Primary numerology of 55:

He died a span of 215 days after his last birthday and 21 weeks, 5 days before his next:

Siegfried’s death occurred at the age of 81. It’s been 81 months since Montecore, the tiger who bit Roy, died. This is the Reverse value of Vegas.

Notice the Ordinal / Reduction values of 54 and 18. Roy Horn’s death was announced on May 9th last year, a date with 54 and 18 numerology:

White tigers also has a strong gematric connection to the number 13. 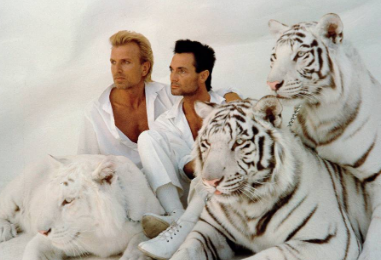 Siegfried was born on June 13th. Roy was born a span of 113 days after Siegfried’s birthday on the date 10/3. The tiger bite Roy suffered that led to the end of their Vegas show was also on 10/3. News of Roy’s death broke on the 130th day of last year. Siegfried has now died on January 13th, a span of 103 days after 10/3. Their show at The Mirage lasted for a little over 13 years:

In that Jewish cipher, thirteen sums to 347.

Siegfried’s death on the 13th fell 347 days after the anniversary of their show’s February 1st debut:

It was on a date with Primary numerology of 53:

Year of the Tiger

The next Year of the Tiger begins on 2/01 next year. Siegfried’s death was 1 year, 19 days before that date, syncing up with the duo’s other favorite animal: