While it’s usually impossible to predict exactly what the New World Order will do, the developments of this past week should have been easy to see coming for anyone who’s been paying attention.

Prior to the election, I theorized that Trump was coded to be in office for another term. While the numerology in that post is interesting, the prediction was more based on what I was seeing play out in the media. Trump was hot on the campaign trail, drawing dozens of thousands of supporters to every speech. Meanwhile, creepy Joe Biden, who had clearly been practicing every line he recited in the debates, mostly stayed indoors and couldn’t seem to draw a dozen people to any of his rallies.

The way it had been built up, I truly did not think they had the balls to tell us Biden won the election. But as the hours passed on Election Night and the networks refused to call Trump the winner, it became clear they had something else in store for us. Sure enough, by the time we woke up the following day, Biden had received a gracious vote dump in every single close state, something the major news networks had been conditioning us for the previous day.

Since the election, I watched / listened to at least 25 hours of hearings from the various states in question, and what I had already known for 16 years was simply confirmed – elections in this nation are complete shams. I only participated in one presidential election – the first one I was eligible to vote in back in 2004. As Election Day developed that year, and the exit polls came in, it looked like John Kerry was on a sure path to victory.

However, despite leading the exit polls by nearly double-digits in the state, Ohio wound up being called for Bush, and early the next morning, Kerry was already conceding. Ohio’s 20 electoral votes would have been enough to give Kerry the win. I couldn’t believe it – here we essentially had mathematical proof that he won, yet after more than a year of campaigning, he threw in the towel right away?

What I had feared was true – Kerry’s association with Bush Jr. in Skull & Bones was no coincidence. Indeed, we the people had just been taken for a ride on the roller coaster of political puppets.

Fast forward to 2020, and there’s so much evidence of fraud that exit polling never even got mentioned. This time around, the formulas used to flip votes in the electronic machines were too weak, and they had to resort to massive ballot dumps to push their candidate ahead. In any other election, this would not have been possible, but with over half of the nation voting by mail because of the phantom virus, this proved to be the ultimate advantage. Even though urban counties typically vote 25% – 30% Republican, the late ballot dumps were over 90% for Biden in some cases.

The fraud was so blatant, one must wonder – was it all done in this manner intentionally? Given what has transpired since, I would wager that it was. Remember, I started speaking truth in 2016 right after the election of Donald Trump. Not because I was fearful of having Trump in office, but because I saw that the media’s tactics of division were about to step up to a new level, and I felt that people needed to understand the lengths to which they were being lied to.

With the steal being made so apparent, Trump supporters were rightfully whipped into a frenzy, and they showed up to D.C. on the 6th en masse. This was no problem for the NWO – in fact, the optics of such a large crowd made their story about “capitol violence” that much more believable.

On January 6th, a handful of Republican senators and congressman sided with the people and asked for a 10-day inquisition into the evidence of fraud. Did anyone really think this was going to happen? As I said before, the media would not have called Joe Biden as the president if they were not sure they were in control. A last-second switch to Trump would have completely eradicated whatever remaining trust the public has in them.

So at this point, it was time to employ psychological tactics. Knowing they were unable to refute the mountains of evidence of fraud, they had to find a solution that would prevent it from being presented. Enter the “violent Trump supporters.” 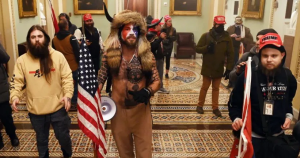 See Decoding Satan‘s post that proves the man in the Buffalo gear is an actor. These men were literally let inside by capitol police for the purpose of making it seem like radical extremists had breached the building, forcing the politicians off the floor. By the time they had re-convened, most of them had suddenly decided voter fraud was no longer important, and that it was better to just go ahead and confirm the votes because, crazy people!

The media now wishes to frame anyone who supports Trump, or even mentions election fraud, as a threat to our nation. Which is a hilarious thing – all year, they urged people to protest the lawful killings of disobedient, law-breaking doped-up criminals, and celebrated when innocent private businesses were vandalized and sometimes destroyed. Now, people have legitimate concerns about whether or not their voice is really heard in government, but we’re all expected to shut the fuck up and just go along with it?

So what’s next? With Biden, who enjoys his role as a thoughtless puppet, we can all rest assured that large-scale false flags are in the works. While the motives of mass shooters of the past have always been murky and obscure, expect that the actors of tomorrow will have more clearly-defined manifestos that display their support for Trump and opposition to globalism.

When the next mass murderer is not just a random crazy person, but someone with political beliefs similar to those of someone you know, the fear will hit new all-time highs and people will be more willing to tattle on their neighbor. More division will build, and the democrat-controlled government will enact more measures aimed at both limiting the distribution of firearms and removing them from the public.

Everything is falling into place. They needed a character like Trump, not just to give us something to fight about, but so they could control what is dividing people. And in 2021, I believe we will see their plan come into focus.