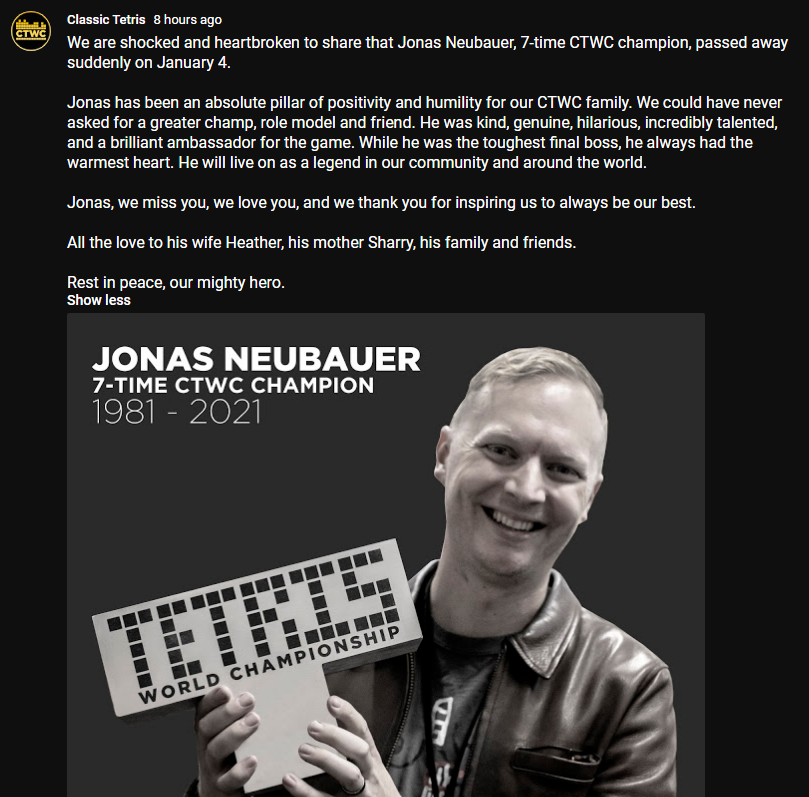 Only a small handful of video games have survived my teens and 20’s and still get played in my 30’s. Tetris is one of those games I still throw on once in a while (NES personal best: 392,469).

As a YouTube user, it was impossible not to learn about the Classic Tetris World Championships, which was dominated by Jonas Neubauer up until recent years. Today, we woke up to news that he suddenly passed away, having no known health issues: 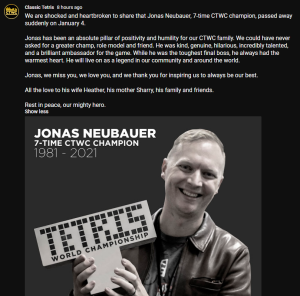 Wikipedia lists his date of death as January 5th, which is 104 days before his birthday.

In early February, Tom Brady will be playing for his 7th Super Bowl ring. Jonas, who is wearing an NFL jersey in his Wiki photo, was a 7-time Tetris champion. 7 is the 4th Prime number, and Tetris is a game of 4-block pieces. Jonas died on the 4th day of the year.

Although he collapsed on the 4th, Wikipedia says he died on January 5th, a date with Primary numerology of 47:

The rest of this post may be disregarded. I had gotten Jonas’s birthday from this bio, which listed it as November 21st. This page had it listed as November 27th, but both appear to be wrong.

Wikipedia has also changed his birthday since I originally made this post. It appears to have been sourced from this Tweet.

Jonas was a seven-time champion of the Classic Tetris World Championships, or CTWC.

Tetris is a game of 4-block pieces. His death on the 4th day of the year in Ka’a’awa, Hawaii fell 4 years, 321 days before his 44th birthday.

In Hebrew, kill and murder sum to 46, the English value of sacrifice. Jonas’s death fell on a date with Primary numerology of 46:

Jonas appeared to be universally adored by the Tetris community. After watching a few clips of his interviews and streams this morning, it’s clear his positivity had a strong influence on those who looked up to him. As we have come to learn, this type of energy in our world is represented both phonetically and numerically.

It’s believed that Jesus was crucified in 33 A.D.

January 4th was 29 days after this year’s CTWC Finals, which Jonas missed by one round:

He died on January 4th.

Perhaps the most famous Bible verse about Jesus is John 3:16:

Jonas was 3016 days old when Tetris was released in EU (the only confirmed NES release date available). He then died 316 days after the anniversary of that same date: