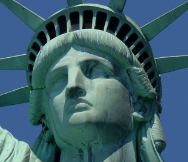 Growing up, we were taught in school that that Lady Liberty stands in the Upper Bay of New York City, overlooking downtown Manhattan. However, the statue’s face lacks any distinguishable feminine features.

Author Elizabeth Mitchell believes the Statue of Liberty is a man, as discussed in this Sun article. Others believe the statue is a re-creation of the Phyrgian sun god Attis, which this particular image lends credence to: 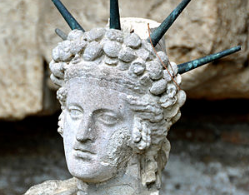 As the events of 2020 have proven, there is a large-scale conspiracy by a small percentage of the world’s elites to depopulate the planet through a wide variety of means. These plans aren’t even a secret.

A significant part of that goal is to prevent as many people as possible from procreating, and a massive tool in that drawer is blurring the lines between gender. By labeling attractive masculinity “toxic” and changing the definition of what’s “beautiful” in a woman, they are removing some of the elements that make humans the most passionate, and when people are devoid of passion, they find themselves devoid of anything worth defending.

The Statue of Liberty is representative of these efforts, and the dark occult has done a lot of work to ensure it is ritualistically honored as this part of the agenda unfolds. In one of my most recent posts, I explained how the announcement of Ellen Page becoming Elliot Page had numerology connecting it to the events of 9/11. Consider how the Statue of Liberty has line of sight to the World Trade Center:

The controllers hope to turn 2 genders into 1. The Twin Tower ritual occurred in 2001. The fact that its destruction, and reconstruction into one male, phallic tower, was witnessed by the Statue of Liberty seems to be no coincidence.

Bruce’s (and now Caitlyn’s) life has been chronicled on national television since 2007 on the series Keeping Up with the Kardashians.

The towers were destroyed 33 years after construction began.

One of Williams’ more famous roles was in the movie Mrs. Doubtfire, where he played a cross-dresser.

Robin Williams was born on 7/21

The Statue of Liberty was originally dedicated on October 28th, 1886:

In 2015, the world was asked to reshape its traditional ideas of genders when Olympic gold medal-winning decathlete Bruce Jenner announced he had gender dysphoria, and was actually, for all intents and purposes, a woman. Less than two years later, Bruce would have surgery and become Caitlyn Jenner. Jenner was born on October 28th:

The interview was 33,063 days after the Statue of Liberty became a National Monument. When Elliot Page came out as trans, his most popular current role was Vanya Hargreeves on The Umbrella Academy.

The number 63 has matching gematria with transgender.

Caitlyn’s birth exactly 63 years after the Statue of Liberty’s dedication also ties into another huge piece of this riddle.

This is the gematria of Liberty’s full official name:

It’s worth noting that these same digits are found in androgyny.

The movie that affirmed Page’s femininity, Juno (where he is pregnant), sums to 60.

The 60th Prime number is 281, similar to 28/10, the dedication date of the Statue of Liberty and Jenner’s birthday. Appropriately, Mrs. Doubtfire , which takes place in San Francisco, has the same 60 gematria as Caitlyn Jenner.

WTC One opened its doors 84 days after the death of Robin Williams, and 105 days after his last birthday:

In astrology, femininity is usually associated with the planet Venus.

As mentioned above, Jenner was born exactly 63 years after the Statue of Liberty’s dedication. This also equates to 102 years, 90 days on Venus:

Page has Primary birth numerology of 129:

As mentioned at the top, Jenner was a gold medal winning decathlete. Notice how Elliot Page came out on the first day of December. Just one day after Page’s announcement, another gold medal-winning decathlete, Rafer Johnson, died.

Both human sacrifice and blood sacrifice sum to 86, To “86” someone is slang for “offing” or “getting rid of”.

Jenner has Primary birth numerology of 106:

The Jenner interview was exactly 5 months, 3 weeks (or 172 days) after the opening of WTC One: