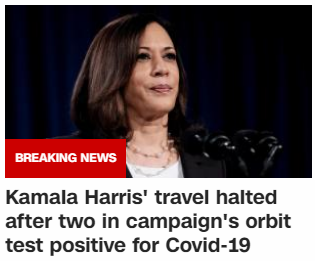 Kamala Harris has the disease’s number, 19, in her gematria.

Notice the odd choice of the word orbit in CNN’s headline.

She was chosen on August 11th, which was the 224th day of the year:

Today is October 15th, written 15/10. News of Covid in Kamala’s campaign was published the same day Trump’s campaign account on Twitter was blocked.

Trump is now accusing the left of election interference.

This 88 is attributed in the headline. Notice the Reduction value of 331, which syncs up with Kamala Harris in Jewish.