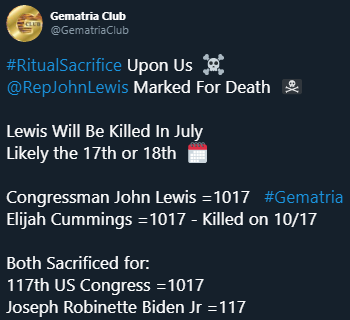 Last week, North Carolina U.S. Representative Alma Adams mistakenly-reported that US Representative John Lewis had died. Although he was battling pancreatic cancer, he was indeed still alive, and Adams had to issue an apology.

This death does appear to be related to Elijah Cummings, whose death I made this post for in October of last year. Gematria Club mentions “Congressman John Lewis” = 1017, but this is a slight typo as that’s actually the value with his full name in Primes.

but it does have double gematria of 117 in Single Reduction.

Elijah Cummings died on 10/17 last year. Both men exited the world stage during the 117th Congress.

The two men died exactly 9 months apart. Pregnancies typically last 9 months. I point this out due to the similarities in appearance: 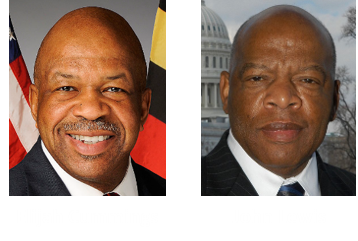 My post on the death of Elijah Cummings explained how it was related to December’s Great Conjunction, which is a conjunction of Jupiter and Saturn. His name had matching gematria with both planets, and he died 93 days before his 69th birthday. “Saturn” = 93 and 69.

Cummings was a Capricorn, ruled by Saturn
Lewis was a Pisces, ruled by Jupiter

Lewis was well-known for being a key figure in the events of Bloody Sunday.

His full name was John Robert Lewis, syncing up with his 21/2 birthday.

Today’s news is 21 weeks, 2 days before the next total solar eclipse. This prediction came from Gematria Club.

I’m glad to see such a strong non-sports related prediction come true. I would never root for anyone to die, but everyone’s passing is inevitable, and calling the date ahead of time for a particular person is perhaps the best way to help wake the whole of society up.

With the recent legalization of sports gambling, and a shifting economy that is hurting the lower class, the draw of profiting from sports has never been stronger. If you’re thinking about paying Gematria Club’s high membership fees, keep in mind that no one is perfect, and wrong predictions have been made there as well. It’s quite evident that the athletes and officials in major sports leagues cannot be trusted to give us an honest outcome, and their eyes are always on the sportsbooks.

I feel a responsibility to add this footnote to my post because within the past year, a member of my Discord committed suicide after losing a lot of money on sports betting over a short period of time, and that is the absolute last thing I want to see. Gematria and numerology gave me spiritual peace and understanding, and this is what I ultimately want my readers and viewers to gain as well.