These shootings were on June 8th, written internationally as 8/6.

A bystander named Wilcox was killed at the Walmart.

13 is an important number to both perpetrators, who were a married couple named Jerad and Amanda Miller.

His wife, Amanda Miller, was born on a date with Standard numerology of 130:

The number 13 is prominently displayed in the CCTV footage given to us of the shooting’s final moments: 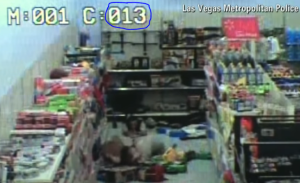 The incident was exactly 9 years, 10 months before the 2024 Great American Eclipse. More on the eclipse riddle at the bottom of this post.

Miller has Jewish gematria of 164.

On the date of the shootings, Jerad was a span of exactly 1640 weeks old. His wife Amanda was a span of 164 days after her birthday:

In Reduction, Miller sums to 33.

The first shooting of occurred at a CiCi’s Pizza. C-C like 3-3. The victims were police officers.

The event began at a CiCi’s Pizza. It ended at a Walmart.

It’s said that the perpetrators, Jerad and Amanda Miller (a married couple), covered the slain officers with a Gadsden flag.

Earlier in the year, the Millers had participated in the Bundy Standoff alongside Cliven Bundy.

Consider how 58 people were killed in the largest mass shooting in American history, the Las Vegas shooting of ’17.

The shootings, the first of which was at a Pizza shop, were carried out on June eighth.

The couple then carried on to a Walmart.

There is more to the links between the shooters and Walmart’s numerology. Consider how Walmart was founded by Sam Walton would have been 72 days after his birthday on the date of the shooting, and the subsequent news story:

Walmart was founded on 7/2

Walton’s numbers may even be connected to the Mayor of Las Vegas, who was (and somehow still is) Carolyn Goodman, who had been in office for 1068 days:

The events of June 8th, 2014 in Las Vegas are rather confusing. One can make sense of the fact that two angry anti-government citizens killed two police officers. But why in the world would they then go into a Walmart to die?

Jerad Miller fired a warning shot after entering the Walmart, but never shot any civilians. A man named Joseph Wilcox heard the commotion inside the store and decided to put his concealed carry permit to use, drawing his firearm for an attempt to sneak up on the gunman.

Unfortunately, Wilcox did not realize Amanda Miller, who was also armed, was with Jerad. She fired upon Joseph, ending his threat with one bullet. He died on the 159th day of the year:

On May 23rd of 2011, Amanda Miller had posted a strongly-worded message to Facebook:

The Gadsden Flag is named after Christopher Gadsden, who has 644 overlap with both Scottish Rite and Las Vegas.

June 8th is also the date that leaves 206 days in the year:

The names of the two police officers who were killed sum to 206:

187 is the police homicide code:

The shootings made headlines on 6/9. This is the gematria of Jerad, Miller, and Jerad & Amanda Miller.

Walmart’s founder, who was born on a date with Primary numerology of 69, has a name that sums to 69 in two methods:

The Millers’ blood sacrifice at a CiCi’s Pizza made the news 1210 days before the 2017 Las Vegas shooting. The shooting itself was 1211 days earlier:

This means the twin eclipses are 82 lunar phases apart.

Amanda Miller was exactly 8200 days old on both dates:

One last observation…I often mention 173 as part of the eclipse crucifixion code. Consider how the 173rd Prime number is 1031.

1031 has the same numerology as 131, the Ordinal value of crucifixion.

The two twin eclipses are separated by 346 weeks. That means the midway point is 173 weeks after the first eclipse and 173 weeks before the second. The number 173 is the word ELI flipped upside-down. Could this have anything to do with why Jesus says ELI not once, but twice while on the cross?