In Extended, Martin Luther King sums to 1109, virtually the same as George Floyd in Ordinal.

Martin Luther King Jr. was born in 1929, syncing up with the Extended value of George Perry Floyd.

Martin Luther King Jr. gave his I Have a Dream speech in 1963.

The number 320 can be seen on the back of the automobile Floyd was pulled from during his arrest:

It can also be seen on the back of the undercover police cruiser that Floyd is killed next to: 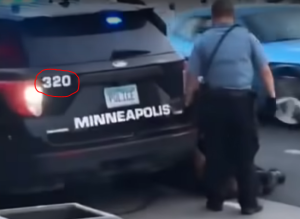 320 has matching gematria with Minneapolis, Minnesota, which sits on the 93rd meridian.

Minnesota was the 32nd state admitted to the Union. Martin Luther King Jr. was assassinated on a date with a Life Lesson number of 32:

The 32nd Prime number is 131. Minnesota was admitted to the Union on the 131st day of the year:

Notice how George Floyd sums to 178 in Reverse, the Ordinal value of the digits three two zero:

Floyd died 56 years after I Have a Dream on a date with Primary numerology of 70, the 146th day of the year:

The gematria of 320 is significant for another reason:

Notice the 287 Ordinal value. George Floyd was born on the 287th day of the year:

MLK was assassinated on the date leaving 271 days in the year:

George Floyd was born in Fayetteville, North Carolina. The morning of his death, I made this post about the day’s top story, which was Donald Trump threatening to move the GOP National Convention out of North Carolina. On the date of the story, Trump was a span of 27010 days old, and on the date the convention was scheduled to begin, he would be 27100 days old:

271 is the 58th Prime number, something very relevant to Trump as I highlighted in that linked post.

Martin Luther King was assassinated 220 days after the anniversary of his I Have a Dream speech. It was also 2 months, 20 days after his birthday:

The death of George Floyd was 1122 kilometers from the assassination of MLK: 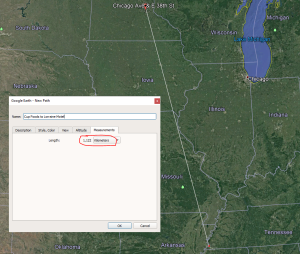 JFK was assassinated on 11/22. This brings us back to June 20th, which appears to be a very significant date for Donald Trump, the 45th President.

The date of MLK’s assassination had Primary numerology of 95, and fell on the 95th day of a leap year:

I find it quite alarming that 666 days before June 20th was August 24th, 2018. That’s the same date the GOP National Convention was scheduled for this year. It’s the date written 24/8.

Trump became president because he was rich and famous. On August 24th, 2018, exactly 666 days before June 20th, the man who hosted Lifestyles of the Rich and Famous, Robin Leach, passed away.

His full name also shares 76 gematria with Trump. He died at the age of 76.