Minnesota became a state on the 131st day of the year:

The current governor of Minnesota is Tim Walz.

Minnesota was the 32nd state admitted to the Union in the year 1858.

These are numbers significant to the crucifixion code.

Minnesota became a state on a date with Standard numerology of 74:

Minnesota has matching 11 and 515 gematria with Jesus, who was crucified in the year 33 A.D.

The date Minnesota was admitted also had a Life Lesson number of 38:

April third has gematria of 511, which is how May 11th is written in the United States.

May 11th can also be written as 11/5. On the Hebrew calendar, the crucifixion occurred on 16 Nisan, which is the second day of Passover. This has matching 115 Ordinal gematria with April third, ideal for the killing of Jesus.

These are the same digits found in the Ordinal value of Jesus Christ. 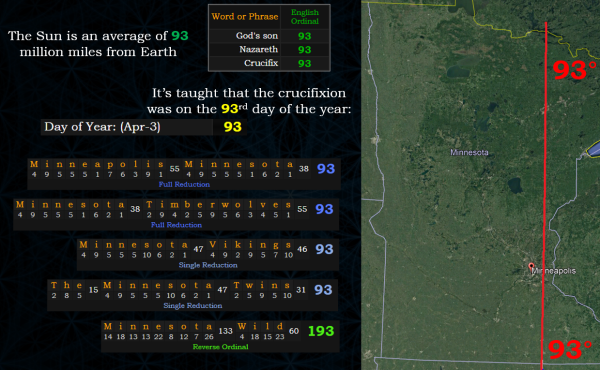 Notice how Minnesota Wild sums to 193, the 44th Prime number. The city is also on the 44th parallel.

Their baseball team is called the Minnesota Twins. This is because Minneapolis and neighboring St. Paul are called the Twin cities. It’s almost unheard of in the rest of the country for two large cities to be so close to one another. The astrological sign that represents twins is Gemini, which begins in May, the same month Minnesota became a state.

This could also be a reference to the twin eclipses that create an “X” over the United States in 2017 and 2024:

Of all numbers, perhaps 1331 is the most significant to the eclipse code. See this link for a comprehensive explanation on why. The numbers 133 and 331 can be overlapped (like an eclipse) to create the number 1331. Both of those numbers have gematria of 1331.

In Reverse, Minnesota sums to 133.

In Ordinal, Mayor of Minneapolis, Minnesota, Minneapolis Police Department, and MPD all have 33 gematria.