Bill Gates has the same 33 gematria as eclipse.

In Reverse, Bill Gates has the same 156 / 57 gematria as the Hebrew values for eclipse. Eclipses always occur 1, 5, or 6 lunar phases after the most recent one.

Microsoft was founded in the city of Albuquerque, New Mexico. Albuquerque is a special part of the eclipse code that’s currently in play with the coronavirus.

In the year 2023, an annular solar eclipse crosses over the United States. No major city is closer to the middle of its path than Albuquerque: 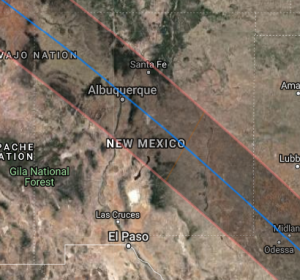 The founding of Microsoft is freakishly-connected to this eclipse. Consider how it occurs in the year 2023, a number highly-significant to The Moon, which sums to 223 in Hebrew.

Notice how the 2023 annular eclipse occurs on October 14th, the date written 10/14. When Microsoft was founded, Bill Gates was exactly 1014 weeks old:

The eclipse falls on a date with Primary numerology of 67:

A solar eclipse often occurs exactly 19 years after a previous one due to the 19-year Metonic cycle.