He collapsed on February 11th, the date written 2/11
211 is the 47th Prime number
Bouwmeester plays for St. Louis

This event occurred by the eclipse crucifixion code. Fortunately, Bouwmeester is doing fine after the incident.

Bouwmeester collapsed in Anaheim, which is the largest city on the 33rd parallel to have 33 gematria, on a date with Standard numerology of 33

Bouwmeester’s full name sums to 227, a number synonymous with the code.

The Blues currently have 73 points

Bouwmeester went down 730 seconds into the game 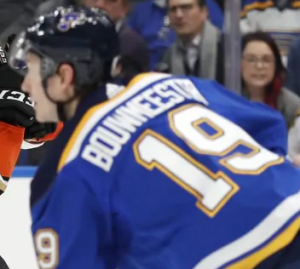 The Blues were founded in 67.